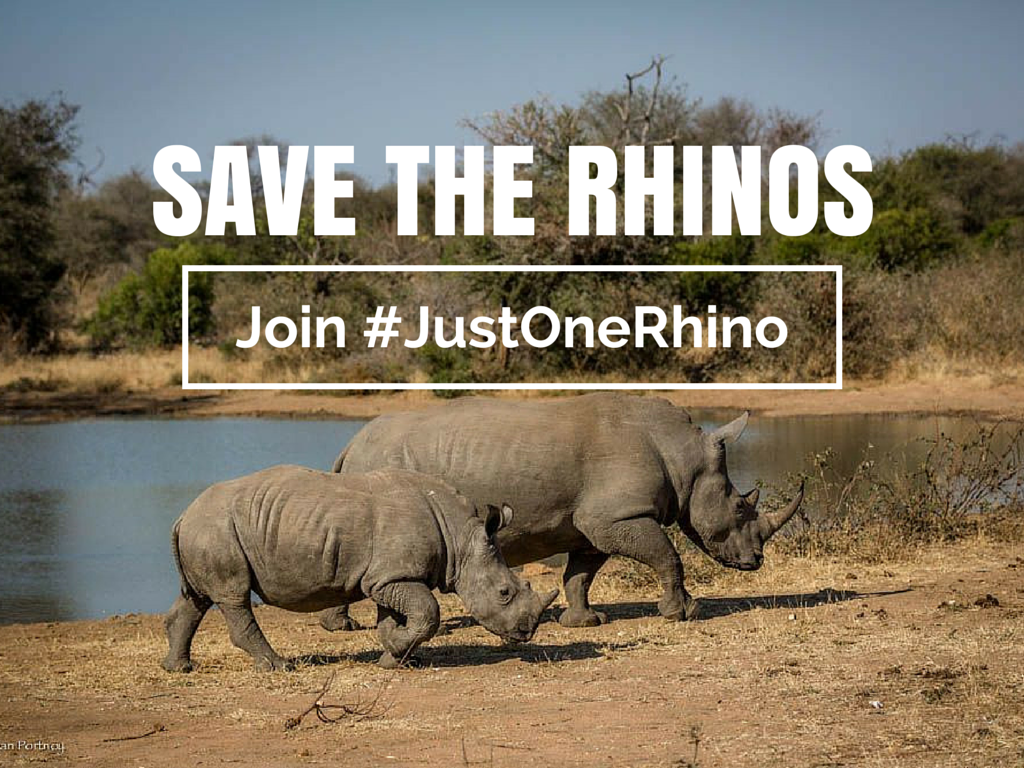 Save the Rhinos! Join #JustOneRhino

Save the Rhinos! Join #JustOneRhino

We all have a big problem on our hands. Rhinos are in danger and could be extinct very soon if we don’t do anything about it. Yes, I said we. This is not one of those “someone else will handle it” kind of problems. This is a joint effort that every single one of us is responsible to take action on to save the planet in which we live. Rhino poaching is at an all time high and now is the time to start being proactive.

Last year over 1,000 rhinos were killed in South Africa alone. That means we are now losing rhinos to poaching more quickly than they are breeding. From 500,000 rhinos back in the beginning of the 20th century, we are now down to less than 26,000 rhinos, more than 80% of which are located in South Africa, mostly in Kruger National Park. The primary reason rhinos are poached is for their horn, which currently sells for $65,000 per kilo (2.2 pounds).

Rhino poaching deaths have increased a whopping 206% from 2010 to 2014. It’s time we all start taking action on this pressing issue to stop the trend of rhino poaching in it’s tracks.

What is #JustOneRhino All About?

Travelers Building Change and Green Travel Media partnered up to raise money for Rhinos Without Borders (RWB), an organization focused on saving endangered rhinos from the rise in poaching by translocating 100 of them from South Africa to Botswana, home to one of the best anti-poaching efforts in Africa. Weighing in at over three tons, it can be a very costly ($45,000 on average to move a single rhino!) and challenging task to relocate them. Thankfully, the RWB project is led by Great Plains Foundation founders, Derek and Beverly Joubert, who are passionate about saving the rhinos and are determined to unite people from around the world in support of the cause.

Last year, Travelers Building Change raised $7,500 for abused elephants in Thailand. This year, they are aiming to raise at least $45,000 for endangered rhinos in #JustOneRhino, the hashtag used in the campaign.

WHY: The Rhino situation is critical, with one poached every 7 hours in South Africa. Current predictions suggest they’ll go extinct in the wild within 20 years if the current poaching rate continues.

Every little bit helps in saving the rhinos, and by donating you also have the chance to win some amazing prizes! Donors get “tickets”– $20 for 10 entries, $30 for 20, $50 for 30, etc.– and get to choose their top three prizes they want to win. Prizes will be drawn randomly.

How You Can Help

Donate to #JustOneRhino today and you’ll be entered to win a prize of your choosing! With over 20 corporate sponsors donating some stellar prizes, it’s like a massive raffle you can enter with the proceeds going towards a great cause! There are over $30,000 worth of prizes such as tours and hotel stays in 11 different countries on 5 continents, gift certificates, travel gear, and more! See some of my favorite prize options from our platinum sponsors below:

Donate here for your chance to win. See donation levels below for the amount of entries you can earn. With those entries, you then get to select the top three prizes that you want to win. We appreciate any and all help you can provide in saving the rhinos!

Donate between now and March 1, 2015 for your chance to win!
Prize winners will be announced on World Wildlife Day, March 3

Donate Now for Your Chance to Win!