Victoria Falls: The Smoke That Thunders

Woke up to beautiful weather on Saturday morning and ready to go see Victoria Falls! We took a taxi there and were greeted by a baboon family when we arrived. We had to be careful we didn’t have any bags from Shop Rite, the local grocery store, when we visited the falls because the baboons know that those bags mean food and they will attack to get the food. We managed to catch a nice view of the baboons just relaxing and laying around. 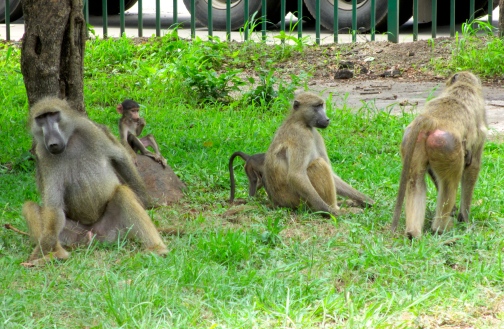 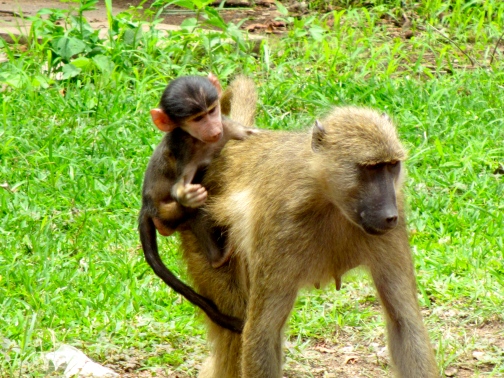 We entered the park to see the falls and they are the most breathtaking scene I have ever had the opportunity to see. The more we kept walking along the path, the more beautiful they became. It was so amazing to see a true natural wonder that its beauty cannot help but leave you speechless. 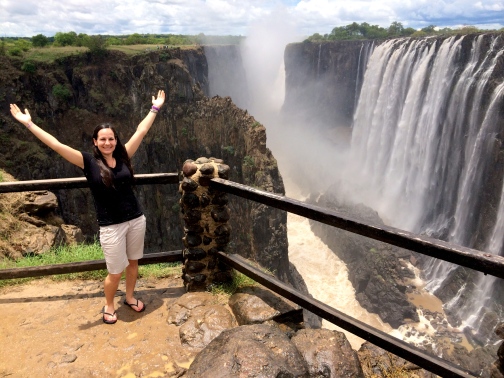 David Livingstone first saw the falls in 1855, from what is now known as Livingstone Island. He named these great waterfalls after Queen Victoria, but they are also commonly known by their indigenous name, Mosi-oa-Tunya, meaning “the smoke that thunders.”

“No one can imagine the beauty of the view from anything witnessed in England. It had never been seen before by European eyes, but scenes so lovely must have been gazed upon by angels in their flight.” -Livingstone, 1857 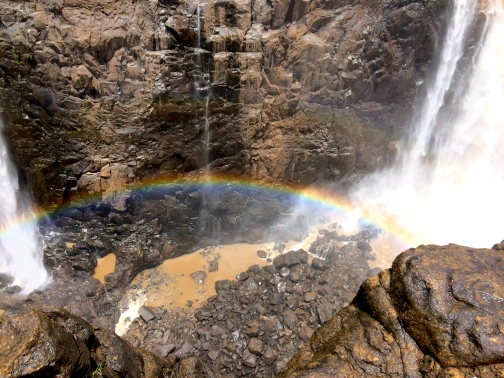 Victoria Falls is the largest curtain of natural falling waters in the world and is one of the seven natural wonders of the world. It is estimated to be 250,000 to 100,000 years old, but the rock that the falls sit on ages back millions of years ago to the dinosaur days. The spray from the water could be visible up to 18 to 31 miles away. The way the water sprays is where the falls get their name: “The Smoke That Thunders.” The floods are at their lowest in November to December, so the pictures I took that you can see in this post are when the waterfalls are considered “small trickles of water.” April is when flood season is at its peak, and the spray will leave you soaking wet if you view the falls on foot during this time of year. The entire width of the falls is not even accessible on foot during this time because the waters are so high, so your best bet would be to get an aerial view of the falls by helicopter. 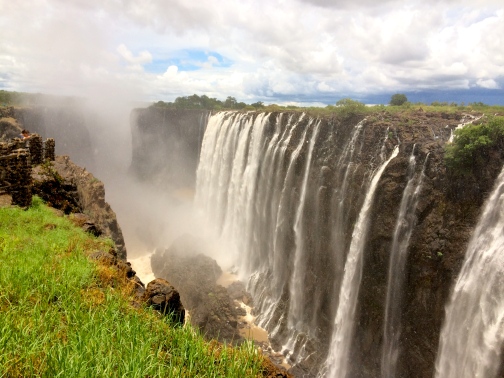 Viewing the falls from above, you can see the zig zag pattern of the gorges that are made by the falls. Over time, the falls recede upstream as they erode the previous gorges. See the photo below to view how the changing waterfall positions has created a natural zig zag pattern of gorges. The force of the water will soon cut back another gorge, establishing a future line of the waterfalls. Their size now indicates that long ago, our ancestors who viewed the falls saw much wider waterfalls. 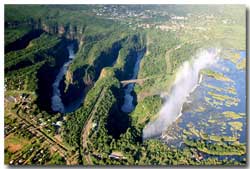 After taking it all in, we had lunch next to the bridge where we could watch all the people bungee jumping. The Victoria Falls Bridge was planned by Cecil John Rhodes, although its construction was not started during his lifetime. It was a crucial link in the railway routes and is the only rail link between Zambia and Zimbabwe. The bridge was assembled in Darlington, England at the Cleveland Bridge Company, and then the sections were shipped to Africa. 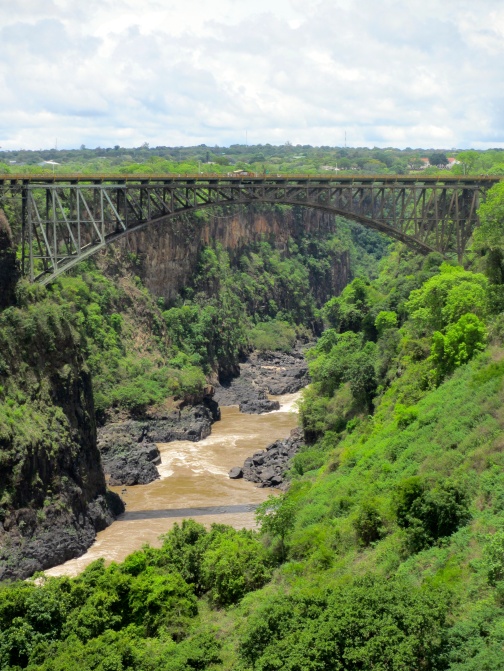 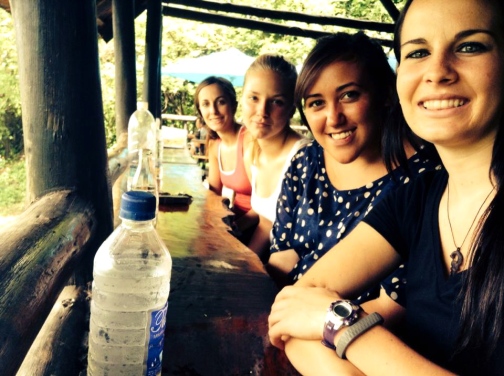 The bridge was completed in 1905 after only 14 months of construction, and at this time it was the highest bridge in the world. Today, the bridge is one of only a few in the world that carries road, rail, and pedestrian traffic. The bridge carries between 120 and 180 freight trains a month and it is estimated that 500,000 people cross the bridge annually. 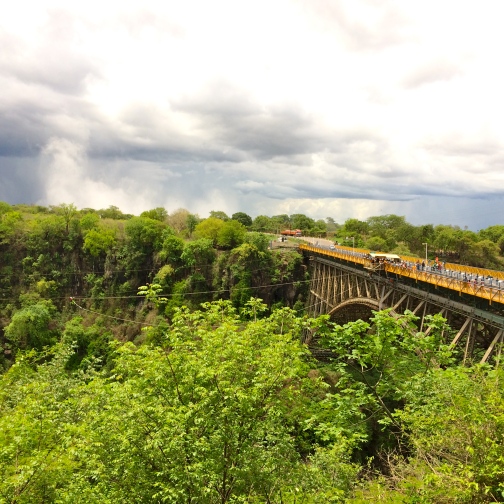 As we were heading back from lunch the rain arrived. It started down-pouring and we still had to walk back across the bridge to catch a taxi. We had ponchos/rain coats, but we all still got soaked. We wanted to go to the Maramba Market and it seemed like it was clearing up a bit so we decided to just go straight there once we got the taxi. We bought some brightly colored fabrics (called chitenges) because the wife of one of the local staff members where we were staying makes all kinds of clothing, purses, etc. that she sells as a side gig. As we were leaving the market the rain picked back up again. The pathway back to the taxi was now like a river of water that almost came up to my knees. We tried to move fast to get to the taxi but our feet just sunk down into the mud. It was dreadful to think about all the people that worked hard to run their own stand at this outdoor market and then have to protect all their goods that they have set up when the weather gets bad like this. After finally making it back to the taxi we headed back to the house to relax for the night. We went to bed early on Saturday to rest up for our busy and fun-filled Sunday morning. Stay tuned for more tomorrow!

On The Road Again, Heading To NOLA!

Willkommen in Frankfurt am Main, Deutschland

Chicago for the Budget Traveler