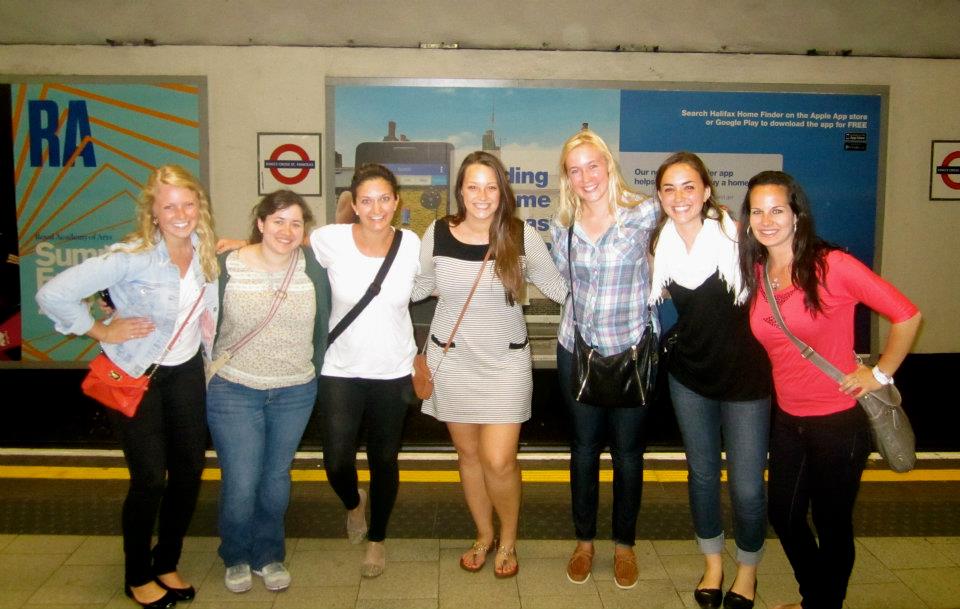 Day 14: The End of the Final Frolic in London

We continued to frolic through London as we made our way to Harrods, one of the most famous department stores in the world.

I have never seen anything like it. My mouth was open the entire time we were there from the shock of it all. The first place we headed was the sweets and then the food area. Bad idea. I wanted to eat everything there, even the things I don’t like! All the food they had there looked so delicious. And you can’t forget the dessert of course… my favorite part of every meal! They had everything you could possibly think of, I felt like I was in Willy Wonka’s Chocolate Factory. Not only did the desserts look delicious… they were beautiful! Baking truly is an art.

All kinds of doughnuts… even sparkly ones!

We headed upstairs to further explore this enormous dreamland, and I think I had to pinch myself by this point to make sure I was awake. It was the most spectacular ice cream parlour I have ever seen. They had all different flavors of gelato and an entire menu of sundaes. The unfortunate part was that they were about 15 pounds each… which is equivalent to about $30. Yes, that is for one sundae. But still in our dream state, three of us handed over our money and decided to split a giant, delicious sundae.

The presentation was so pretty I didn’t even want to touch it, but at the same time I couldn’t wait to dig in. After snapping a whole bunch of pictures we each took a spoonful of cold chocolatey goodness.

Me, Rachel, and Denni about to dig in to our sundae

Who knew gelato could taste so fresh?! After indulging in our scrumptious sundae we kept going on our journey through Harrods. We saw clothes, furniture, shoes… everything you could imagine. They even had chandeliers in the elevator! Everything was priced ridiculously high, of course. I will definitely return for some real shopping if I ever get rich. At least Harrods had air conditioning, unlike other stores we stopped in while in London. We had 70 and 80 degree (Fahrenheit) weather the whole week we were in London. Yet most places either did not have air conditioning or did not feel the need to turn it on. Most of the tube lines did not have any either. So we were pretty toasty no matter where we went. We continued our shopping (browsing, actually) when we left Harrods. After spending a decent amount of time in Topshop and Zara we headed back to the flats to get ready for dinner.

We went out to eat with almost the entire study abroad group, which is over 20 people. That is a lot of people to eat at one place in Europe. Many places we ate in were pretty small and not used to big groups, so we tried to split up when there were a lot of us going to eat. Since this was our last night, we decided to all eat together at place our professors recommended for the best fish and chips. It was called The Golden Hind, and if you are ever in England you need to go here for fish and chips. They don’t sell alcohol there but you can bring your own. It was a very simple place, but worth a second trip. We called ahead so they knew a huge group of us was coming and they said they could take us. We got there and they brought us downstairs to this room that we had all to ourselves. Now it was not a very big room, but it was big enough to fit us all comfortably. I don’t like seafood, so I went with the only other thing on the menu- a salad. It was hands down the best greek salad I have ever had. So delicious! And I actually tried the fish, because everyone was raving about it. And tasty it sure was. It did not taste like fish at all. I guess that’s why this was the best fish and chips place!

Rachel, Emily, Michelle, Sarah, and me in front of The Golden Hind

I have to mention the service as well. We had one waiter serving all of us in the room. I don’t think I have ever seen that kind of service in America. First of all, this guy was going up and down the very steep and narrow stairs to carry all our food and drinks down. Then there was also the whole issue with the water. Just before our food was served our waiter noticed some water on the ground. Turns out a pipe or something had burst in the bathroom and water was slowly beginning to creep out. By the time we had finished eating, there was a thin pool of water across the entire floor of the room. Our waiter apologized to us a million times, as did the owner who came down to apologize as well. We assured them that it made no difference to us since we were college students so it really didn’t phase us. We said it was very authentic… like we were eating fish and chips right on the water! Overall, they handled the situation very well and if I was ever back in London I would return here without a doubt. It was a great dinner on our last night.

We still needed one last frolic through London before we called it a night. We took the tube over to Leicester Square to find some gelato. We found this amazing place called Rendezvous. It had so many different flavor choices, I feel like I tasted 20 of them before I decided what I wanted.

Soon we had to leave Leicester Square and we took our last tube ride back to the flats. We also made sure to get a final group picture at King’s Cross Station.

We got back to the flats and still had to pack everything for the next morning. We had to be ready to go at 4am… pretty rough. So I got about 2 hours of sleep, hoping it would be easier to sleep on the plane. The next morning we woke up still in darkness, which is always strange to me. After long lines and intense security at Heathrow Airport, we finally got to the terminal. But only after making one last stop at Pret, of course. I wanted to get something for breakfast since I hadn’t really eaten anything, and I decided to get some lunch too since I wasn’t sure if we were getting any on the plane. So ending the trip with a bang, I had an entire bag stuffed with food from Pret. No shame. Every bite of it was delicious. And it was all gone within the first few hours of the flight. As for sleeping on the plane, that didn’t go as well as planned. We were on a nice 747 plane, each with our own personal TV right in front of us. Needless to say, it was pretty distracting. I tried to sleep but I just couldn’t resist. They had so many great TV shows and movies I could watch. They even had New Girl, which I just couldn’t pass up. If you’ve read my old post about New Girl you know how big of a fan I am. They even had Terra Nova!! I am so sad that show ended. I will probably blog about that sometime in the near future.

Needless to say, I had a spectacular trip over two weeks in the British Isles. It went by so fast, but it was well-worth every second. We took advantage of as much as we could, learned a ton, saw a ton, and had a great time along the way. I met an amazing group of people and had so many once-in-a-lifetime experiences that I will never forget. It was two weeks that changed my life, and my decision to apply was one of the best I have ever made. You always think you have so much time… I even thought so myself. You think ‘I could just wait until next year’ or ‘I’ll just do it next time.’ But things change and you may find yourself on a very different path a year from now or when that “next time” comes around. So don’t wait for that time to come. Take action now before you miss your opportunity. Every moment counts.