We started off our day slightly later on May 25th, and it was yet another day beginning with a brewery tour. We headed to the Griffin Brewery where we got to see how Fuller’s beer is brewed. 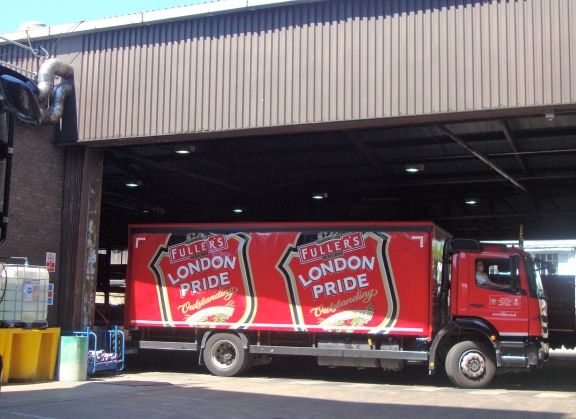 At the end we got to enjoy tasting all the different kinds of Fuller’s beers. Our next activity wasn’t for a while, so we had some time to get lunch and walk around the area. We ate at an Italian restaurant called Strada, which was delicious. Then we walked around to check out all the cool stores they had in the town. It was a great way to spend the afternoon, and it was about to get even better. We came across this one boutique that sold a whole variety of different things, including the book shown in the photo below…

Yes, I know. It couldn’t really get any more perfect. “Simple Pleasures: Little Things That Make Life Worth Living.” Of course, I could not pass up buying this book. It described exactly what my blog is all about. The book consists of a collection of simple pleasures, each written by different authors. I have already finished reading it, but I won’t be talking about it just yet. You’ll see a reference to it from time to time… for now I will leave you with a quote from the forward of the book.

“Some of these will surprise you, some will make you laugh, some will make you think. All, we hope, will help to remind you that there are aspects of life- unrecorded in newspapers or on television- that, while so easily left unappreciated, are truly the things that everywhere and every day make our brief lives so worth living.” -Fiona Reynolds, Director-General of the National Trust

Arriving for the BBC tour

After shopping we hopped back on the tube to head to the BBC studios tour. We got to see where they filmed a lot of big TV shows, like Dancing With The Stars and The Voice (UK versions). We also got to learn a lot about production, and they even had a mock weather forecast station set up for us to try out! We had 2 tour guides that were the best tour guides of our entire trip. They were hilarious! The BBC tour was definitely an enjoyable experience and it was so interesting to learn all about their studios.

Where “Dancing With The Stars UK” and more was filmed

Next we went back toward the flats and had dinner at this amazing Mediterranean restaurant called Sade. Then we went to see Trafalgar’s Square where they have a big sign with the countdown until the Opening Ceremony of the London 2012 Olympic Games. And of course, what would a trip to London be without a classic telephone booth picture?! Sanitary is actually what it would be.. those phone booths are disgusting. I just tried to touch as little as possible while making sure the picture looked somewhat natural.

As we continued walking we saw hundreds of people roller blading right down the middle of the street. They were stopped at a light waiting for traffic to pass so we asked them what they were doing. One man replied (in a British accent), “It’s London Friday night skate, of course!” It was so cool to see all those people coming together every Friday night to rollerblade through the streets of London. Things like that are even more of a reason to love the city.

Then we walked over to Big Ben and the London Eye, which were so beautiful to see all lit up at night. I love big cities at night time, and the way the lights of the tall buildings surrounding you contrast against the dark sky.

That was all for the night, but we still had plenty more nightly excusions of London yet to come.

A Day of Island Hopping From Dubrovnik

Venturing Out to a “Smaller” Side of London

Riga is home to the Ethnographic Open-Air Museum o

I can finally shout it from the rooftops that WITS