May 26th started off with a tour of Olympic Village, which was cool even though I expected to see a little more. I did learn a lot, although I was not a big fan of the tour guide… she seemed kind of high-strung. She took us through the different parts of Olympic Village, explaining the process the area has been going through to turn it basically from the slums to a classier area appropriate for hosting the Olympic Ceremonies. 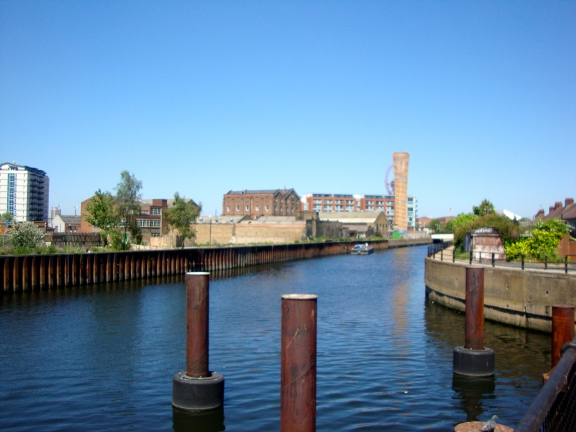 The river that runs through the area used to be where all the sewage went back in the days before plumbing. That obviously didn’t make for a very clean river. For years afterwards, the river stayed pretty dirty. It was so bad that if anyone happened to fall in they were immediately sent to the hospital and quarantined to see not IF they had some disease, but WHAT disease they had. Now, of course, they have cleaned up the river and they even got all new soil in the area. 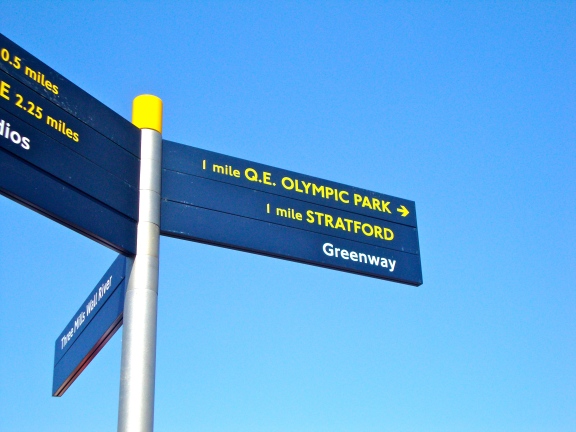 We continued to get closer to Olympic Park as the tour continued. The picture below is the IKEA tower. It is 40 meters high, built by IKEA for the 2012 London Olympic Games. It is a sculpture that resembles the Olympic Torch and will be completely lit up at night. 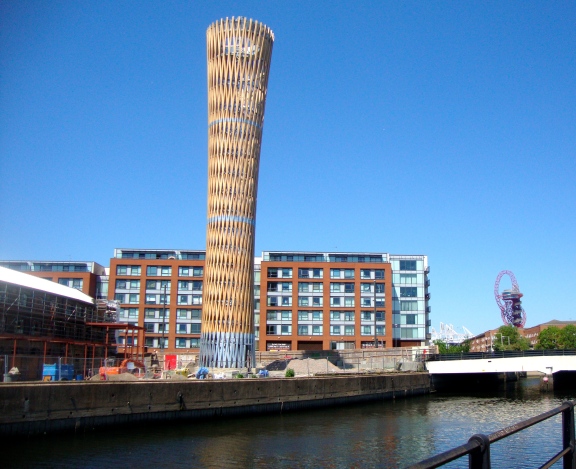 Soon, we were right next to Olympic Park. It was still a lot of construction and we couldn’t go inside, so we got to take a peak from over a bridge. Now when I say bridge I’m not talking about a dinky little thing like in the picture above. I’m talking big, like overpass bridge. And I’m on the short side of average height so my “viewing” consisted of me holding my camera up over the top of the bridge and then looking at the picture to see what was over there. One of the pictures I got is the photo shown below. The big building on the right is the Aquatics Centre, built in the shape of a sting ray. The funny looking red thing on the left is a sculpture built by Anish Kapoor, an Indian-born British sculptor. Orbit is 350 feet tall, making it the tallest sculpture in the United Kingdom. Kapoor is also the sculptor of “Cloud Gate,” or what most of you probably know as “The Bean” in Chicago’s Millennium Park.

Lastly, we got to see (from afar) the building that the Olympians will be staying in. When the Olympics are over, that building will be used as apartments. This ended our tour, and we walked across the street to the mall to check out the observatory in John Lewis (a British department store).

The view from the observatory provided a much better and broader scene of Olympic Park. You can see the Orbit and Aquatics Centre in the picture below. The building in the back right with the pointy things is Olympic Stadium and the white building directly in front of it is the water polo building. 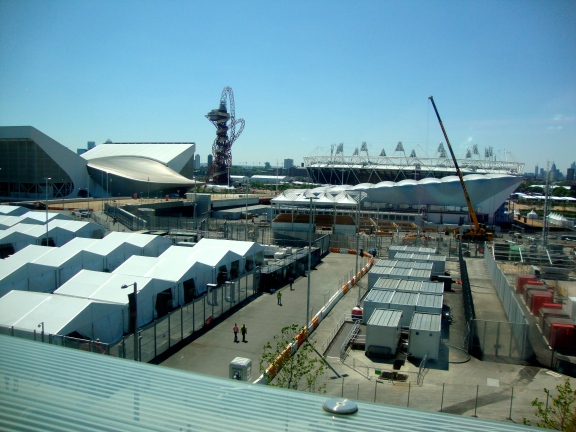 View from observatory in John Lewis

John Lewis just happens to be the Official Department Store Provider to the London 2012 Olympics, so they also had plenty of Olympic gear and souvenirs to purchase. Needless to say, I spent a pretty decent amount of time in there and bought plenty of gifts for family and friends. Once we finished our shopping we headed over to the British Museum for some good old history. But I will be saving that for tomorrow, along with our adventure to Abbey Road!

📍Biblioteca Vasconcelos in Mexico City 📚 Yo

During @sheswanderful’s Global Meetup in Mexico

Did you know Poland is home to an extensive underg

Have you been to Gdansk? Not only is it one of my

A room with a view 📍Gdansk, Poland After 3+ ye

This seafood spread though… anyone else drooling