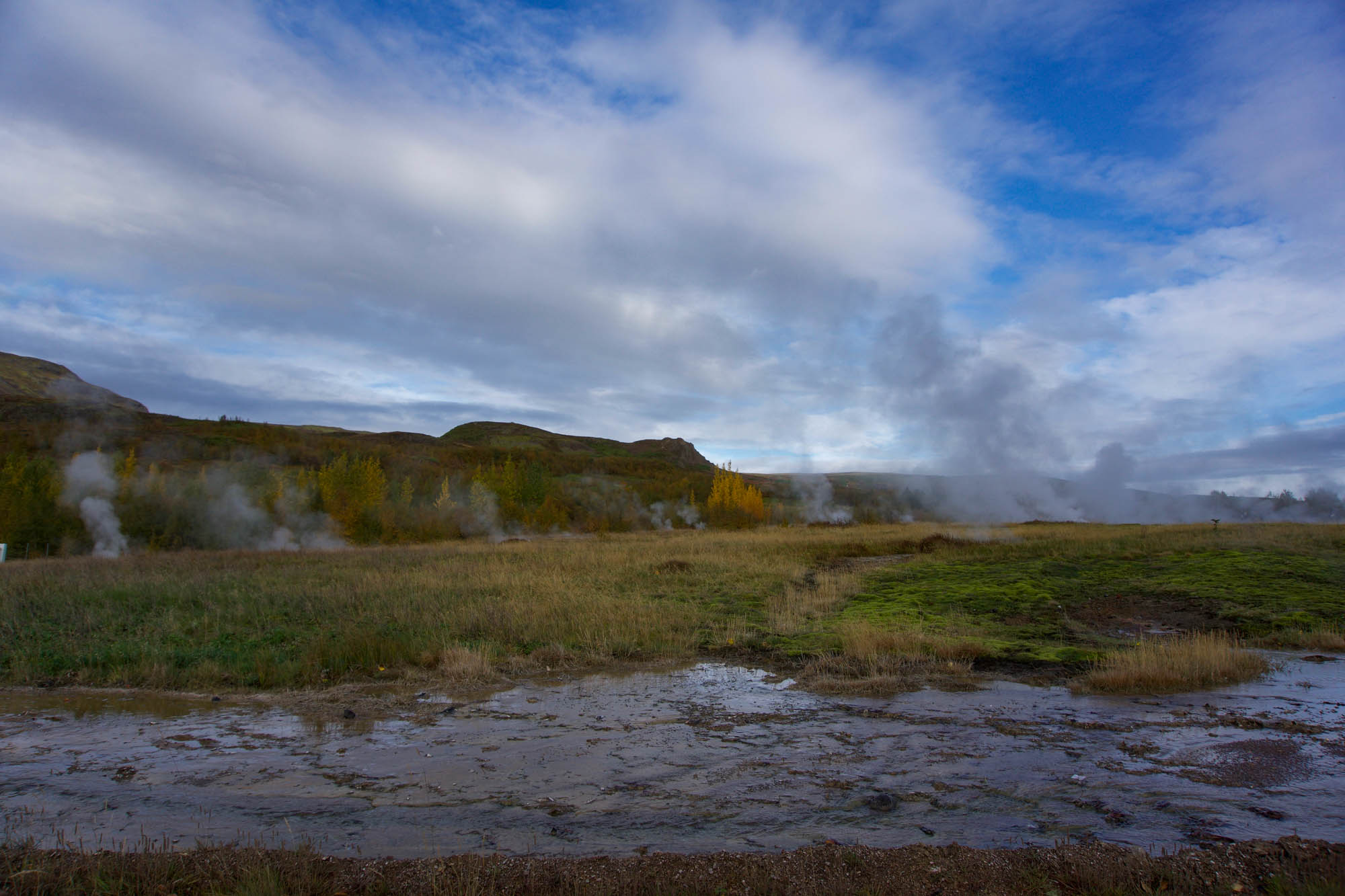 Iceland’s Golden Circle is one of the most well-known drives in the country. There is good reason it’s so popular! Use this post as your step-by-step driving guide to Iceland’s Golden Circle road trip, and you can even use this Google Maps route. The majority of the tour busses leave around 9am, so if you leave by 8:15am that should give you enough time to beat the large crowds of people.

While the total time comes out to under 4 hours of driving time, you should still plan on this being a full day trip and account for at least 6 hours, if not more, for the time spent at each attraction. A full tank of gas should be plenty to last the whole day.

Typically I opt for tours when doing full day trips, but the driving in Iceland is really easy as most of the time the drive is along long stretches of open road with not many other cars around. This was true for the Golden Circle route and I also found it to be the same for the day trip from Reykjavik to Vik. Plus, most Golden Circle tours only go to Thingvellir, Geyser, and Gullfoss, so if you drive you can add additional stops like Kerið Crater which is definitely worth the visit. Be sure to also look out for those adorable Icelandic horses along the way!

This first stop is one that you could spend hours at if you wanted to. There are loads of designated trails at Thingvellir National Park waiting to be explored.

This area is part of a fissure zone where you can see the tectonic and volcanic environment of the park. You’ll notice the many cracks, or faults, on the surface that signify the continental drift between the North American and Eurasian Plates. Some of these rifts are full of clear, icy glacier water. One of these is called Silfra, where you could take Silfra snorkeling tours or go scuba diving. It is truly a unique experience as Iceland is the only place in the world where this rift occurs above sea level.

In addition to its interesting geological characteristics, Thingvellir National Park also has a rich history and is a UNESCO World Heritage Site. Alþingi, the national assembly of Iceland, was established and housed at Thingvellir in 930. During this time, there were laws in place and cases were tried there, but the verdicts were enforced by individuals. In extreme cases where a convicted person did not remain in exile or follow the rules of the verdict, they might be killed by the family of the victim, which was fairly common for Icelanders in those days. In remembrance of of the men and women on which these harsh punishments were inflicted, there are nameplates honoring them throughout Thingvellir.

One of the many geysers at Haukadalur

You’ll know you made it to the geyser area when the smell of sulphur hits your nose. There are all kinds of hot, bubbling pools everywhere you look, giving off a steam that lingers along the ground.

There are two main geysers here: Geysir and Strokkur.

The Great Geysir has been active for over 10,000 years and was one of the very first known to modern Europeans. But don’t get your hopes up on seeing this one erupt — it only does so every few days.

Strokkur is the one you’ll see the majority of people standing around, many of them ready with cameras in hand to capture the perfect shot of the next eruption. Every 5-10 minutes, Strokkur shoots 482 °F (250 °C) water up 100 feet into the air for an impressive performance of nature.

The geysers are initially set off by earthquakes, so this area is constantly changing due to its surroundings. This is also a great rest stop, as there is a gift shop and restaurant where you can warm up and grab a snack.

Gullfoss is a powerful natural waterfall that might not be around today if it weren’t for a determined advocate who fought to protect it. In 1907, an Englishman wanted to harness the immense power of Gullfoss to generate electricity. A local farmer at the time named Tómas Tómasson declined saying, “I will not sell my friend,” but ended up leasing it to him later.

The farmer’s daughter, Sigriður Tómasdóttir, did everything she could to void the rental contract, spending years in trial. She had to journey all the way to Reykjavik for the trials across rough terrain. Although her attempt failed in court, the power plant construction never began and the rental contract was cancelled in 1929 because payments weren’t received. Because of her efforts, Sigriður is often called Iceland’s first environmentalist. Gullfoss Waterfall and its surroundings were eventually made a nature reserve in 1979.

You can climb the stairs and get a view of the waterfall from above, or head down to walk along the edge looking into the abyss of rushing water. If you take the latter route, be sure to come prepared with a waterproof jacket (and pants too if you want to be extra prepared) as you will get pretty wet when you get up close. If you’re lucky enough to visit on a sunny day you will be greeted with beautiful rainbows crossing over the falls.

More than just a restaurant, Friðheimar is an entire greenhouse that uses the area’s geothermal energy to operate year round. Once you sit down, you can enjoy a steaming bowl of tomato soup right next to the tomato plants. Each table also has its own basil plant so you can add the fresh basil to your soup.

We learned the hard way that this place gets completely booked up due to all the tour busses that stop here. Ideally, try to make a reservation in advance. They also have open seating at the bar which is luckily how we were able to eat here, but there are only about three tables in this section so I wouldn’t rely on that.

Another highlight of Iceland’s Golden Circle road trip, Kerið Crater is a volcanic crater lake that is approximately 180 feet (55 meters) deep. The most likely theory of its creation is that Kerið was originally a cone-shaped volcano that emptied its magma when it erupted. This magma depletion caused the weight of the cone to collapse into the empty magma chamber, which is now filled with a fairly shallow amount of water.

One of the reasons this crater is so visible is because it is a “young” 3,000 years old. You can walk around the top of the crater, or there are also steps that you can take down to the water. Looking down on the striking contrast of the red crater walls made up of red volcanic rock against the deep blue of the water is just a small indication of how magnificent nature truly is.

The admission fee to visit Kerið Crater is 400 ISK per person. Keep in mind that there are no restrooms here, so make sure to go after lunch at the restaurant before hitting the road.

From here, it will take about another 50 minutes to get back to Reykjavik.