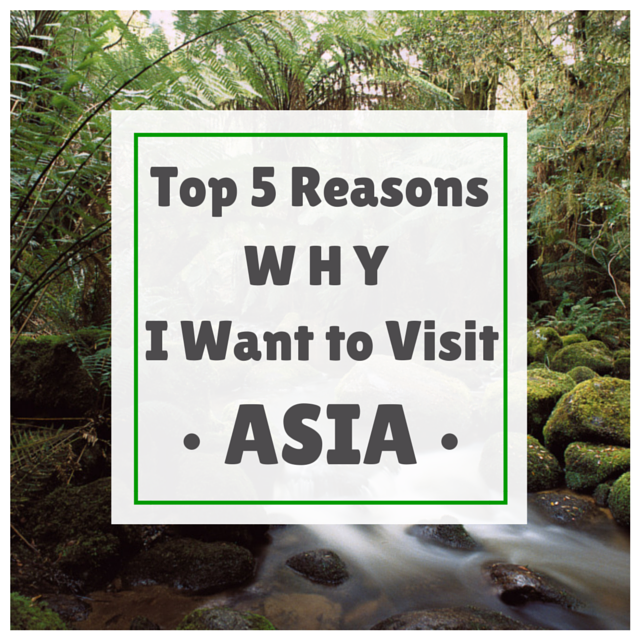 Top 5 Reasons Why I Want to Visit Asia

One area of the world that I have not yet had the luxury of visiting is Asia. This continent is home to some of the most spectacular cities in the world, like Kyoto, Japan and Siem Reap, Cambodia. These major cities are complemented by vast countryside, making up an appealing combination throughout Asia of secluded and fast-paced environments. Although I could go on for much longer, I’ve decided to highlight my top five reasons why I have been itching to visit Asia.

With an abundance of mountains, forests, beaches, rivers, and more throughout the area, the views are breathtaking and also provide many things to do. While some opt for activities like Mekong river cruises in Asia, others may choose to visit popular sites like the Great Wall of China or Mount Fuji. The Maldives and Borneo are some other scenic tourist hot spots and are among the best places to visit in Asia. No matter where I may end up in Asia first, I don’t think I will go wrong with so many beautiful sights and attractions!

Great Wall of China
Photo by Keith Roper via Flickr

I think I could have ended this list after this point alone, because the food itself is really all it takes to make me want to visit Asia. Serving options like octopus, dim sum, nasi campur, pad thai, authentic sushi, and pho, the continent is home to both familiar dishes and new ones (some of which I have never even heard of before). Your stomach will be satisfied after one of these delicious meals!

Not only is Asia known for it’s mouth-watering dishes, but it is also known for its many street vendors. Instead of the best food being found in fancy restaurants like you may typically be used to, you can actually find some of the tastiest meals from the carts and stalls lining the streets in many Asian cities. If you are on a mission for street food, some of the top cities where you will find success are Penang, Bangkok, Fukuoka, Hanoi, Singapore, and Seoul, just to name a few. I’m ready to hop on a plane right now just thinking about it!

Asia is home to more temples than any other continent in the world. It is also the place where many of the world’s mainstream religions and beliefs were born. Therefore, a visit to Asia would not be complete without stopping to see at least a few of its majestic temples. Angkor Wat, one of the most famous temples, is the largest religious monument in the world and is located in Cambodia. Balanced on the edge of a 3,000 foot high cliff, the Taktsang Dzong temple is a well-recognized symbol of Bhutan. Finally, the Temple of Heaven dating back to the early 1400s is an impressive site to see and is also surrounded by a large public park, the grounds where many locals will practice tai chi throughout the week. However, these few barely scratch the surface of the incredible architecture, history, and detail that is found in the many temples throughout Asia.

There is such a wide array of cultures and people from all different backgrounds present across Asia. From the variety of ancient religious ceremonies to the unique beauty routines of Asian women, the customs and traditions of Asia are so intriguing to me and I am craving to learn more about them and experience them firsthand.

The endless wealth of things to do and see across Asia has drawn me in and it’s only a matter of time until I give in to the calling. With so many places to visit in Asia the hardest part for me will likely be choosing where to go. I don’t know which Asian country I will make it to first, but I have a feeling that no matter where it is I won’t be disappointed!