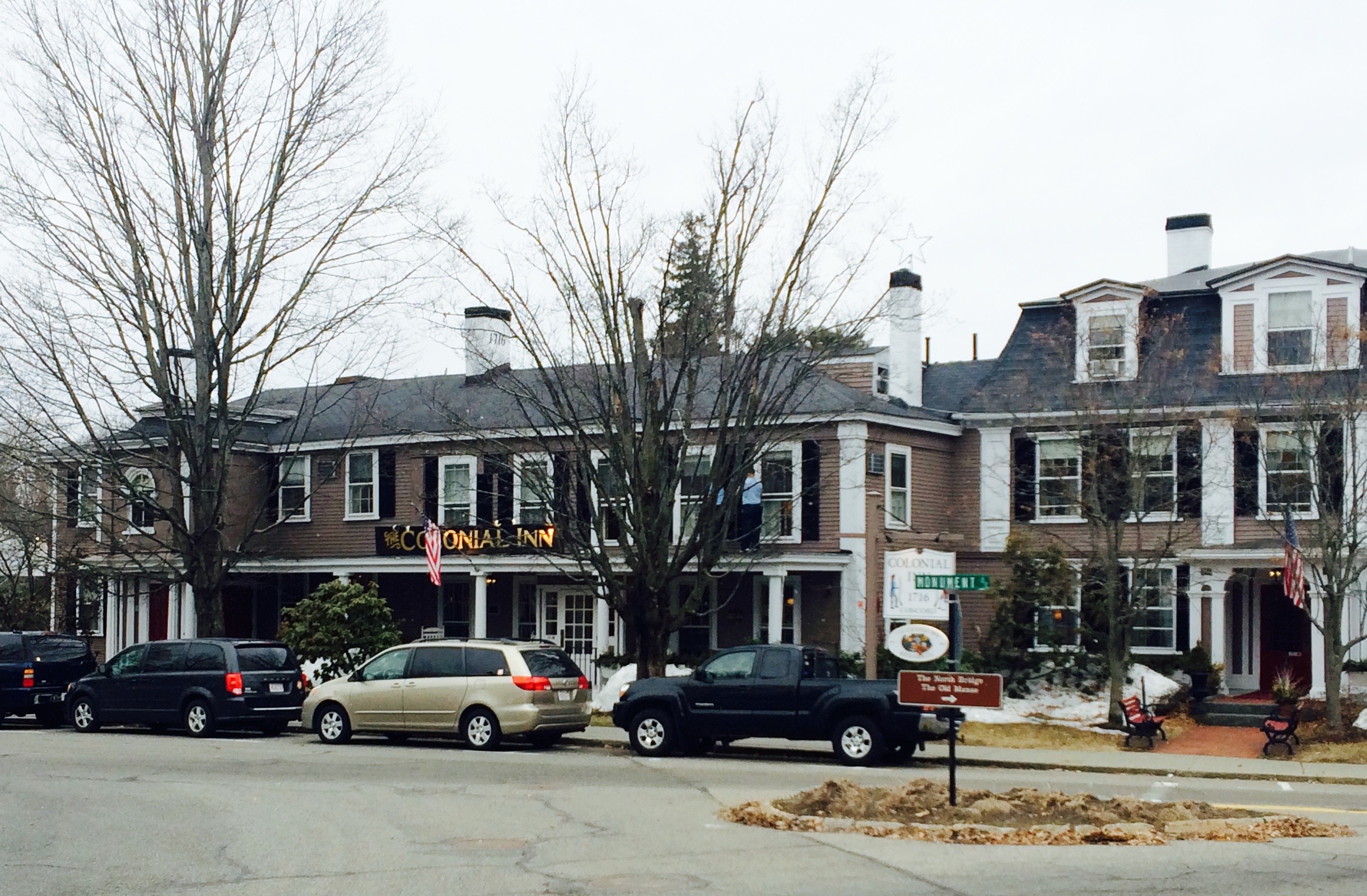 A Night of History at Concord’s Colonial Inn

Located at the center of the town square, Concord’s Colonial Inn has witnessed hundreds of years of history in the making outside its front door. I was looking forward to exploring the history during my visit to Concord, but I was even more excited when I discovered that I could spend the night at the Colonial Inn, a building that has seen the town and the community develop over the years.

History of the Inn

The inn was originally three separate buildings, with the oldest one dating back to 1716. During the events of April 19, 1775 that kicked off the American Revolutionary War, the property was the home of Dr. Timothy Minot who helped care for the wounded that day after the battle at North Bridge.

The property was then purchased by John Thoreau in 1799, the grandfather of Henry David Thoreau. In 1835, Henry’s family moved in with his aunts and for the following two years that was his home while he was attending Harvard College.

Parts of the inn were used as a store until Daniel Shattuck converted the store to a home in 1850. He eventually deeded the property to his daughter Frances in 1861 for “$10, love, and affection.”

In 1885, the home became a boarding house, and then four years later it was purchased by Judge John Keyes at an auction. It was first named Thoreau House, but it became The Colonial in 1898 and the Colonial Inn in 1900.

Members of the Concord Independent Battery were welcomed on April 19, 1900, their names inscribed on the guest registers

The inn saw many significant figures over the years such as Franklin D. Roosevelt. Even when a horse and buggy was the most common mode of transportation, guests still visited the Colonial Inn from all across the nation and around the world.

I was greeted by the welcoming front desk staff member upon entering the inn, and felt the colonial charm present throughout the building. After checking in, the receptionist was kind enough to walk me all the way down the hall to my room.

It was a small but cozy room, perfect for myself as a solo traveler to the area (note: they do have different types and sizes of rooms if you are traveling with others). They should also provide you with a code for free WiFi when you check in, so you can surf the web or get some work done if need be.

The bathroom had all the necessities, and it had one of the best showers I have ever used. There is a possibility that may have had to do with the fact that I was in full on conference mode during the past weekend in Boston, but the shower felt glorious!

Everything was extremely crisp and clean, and I had a nice quiet stay during my one night in Concord. Rates can vary depending on the time of year and what type of room you stay in, but I was pleasantly surprised to find that AAA members receive a discount. Guess they’ve stepped it up from the horse and buggy days!

What would a historic inn be without a haunted tale to go along with it? While no one can say for certain if a ghost haunts the Colonial Inn, many guests of Room 24 have told spooky tales of their stay at the inn. The stories began with newlywed couple M.P. and Judith Fellenz from Highland Falls, New York. They checked in to Room 24 of the inn for their honeymoon in 1966. It wasn’t until two weeks later when the innkeeper at the time received the following letter from Judith:

“I have always prided myself on being a fairly sane individual but on the night of June 14 I began to have my doubts. On that night I saw a ghost in your Inn. The next morning I felt too foolish to mention it to the management, so my husband and I continued on our honeymoon. I wondered whether or not any sightings of a ghost had been reported or if any history of one was involved in the history of the Inn.

The incident sounds very melodramatic. I was awakened in the middle of the night by a presence in the room—a feeling that some unknown being was in the midst. As I opened my eyes, I saw a grayish figure at the side of my bed, to the left, about four feet away. It was not a distinct person, but a shadowy mass in the shape of a standing figure. It remained still for a moment, then slowly floated to the foot of the bed, in front of the fireplace. After pausing a few seconds, the apparition slowly melted away. It was a terrifying experience. I was so frightened I could not scream. I was frozen to the spot . . .

For the remainder of the night, I could not fall asleep. It was spent trying to conjure a logical explanation for the apparition. It was not a reflection of the moon as all the curtains were completely closed. Upon relating the incident to my husband, he said the ghost was included in the price of the room.”

Since then, many other guests of Room 24 have claimed to experience the same type of paranormal activity, and the inn has been featured on a number of paranormal investigation television shows such as SyFy’s Ghost Hunters.

While I didn’t have any paranormal experiences during my stay at the Colonial Inn, I did get to experience the literary and revolutionary history that is embedded in the inn’s past. It was fascinating to stay in a building with such strong historical ties and to spend a night in the charming town of Concord, Massachusetts. I would absolutely return to stay at the Colonial Inn again, and would highly recommend it for a interesting getaway from Boston!