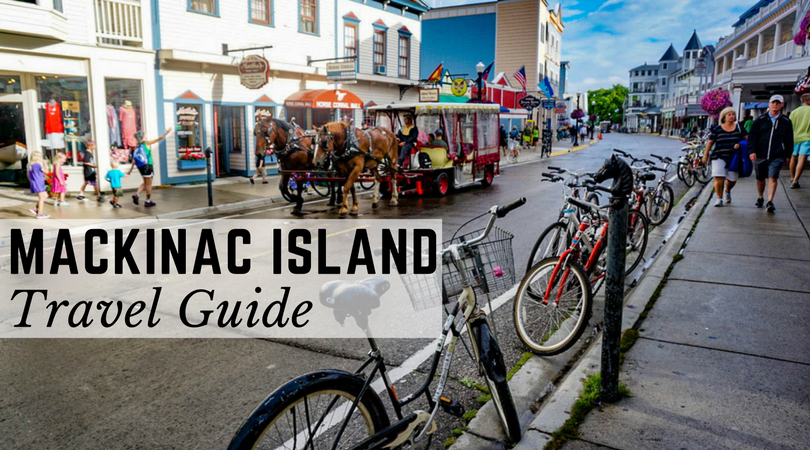 A summertime girl’s getaway to Mackinac Island proved to be the perfect quiet retreat to slow down and disconnect while enjoying a more simple nineteenth-century way of living without cars. After the first automobile drove the roads of Mackinac Island, it didn’t take long for automobiles (or, “horseless carriages” as the locals called them) to be banned completely on the island in 1898. Make the most of your time with this Mackinac Island travel guide, and snag your own downloadable guide here!

The first visitors to Mackinac Island were the American Indians from 1000 B.C. to 1650 A.D. when they used to paddle out to the island every summer to go fishing. Because the fish were so abundant, they referred to the waters as “the home of the fish” and since it was a sacred place to them, they named the island “Michilimackinac.” Europeans came to settle in the area in 1670, and eventually, the name was shortened to Mackinac by the 1820s. Fast forward to 1875, when Mackinac Island had become a popular summer destination, and Mackinac Island National Park was established — the second national park in America after Yellowstone. The whole island is one big block of limestone, making for some interesting and beautiful rock formations throughout Mackinac Island.

If you are within a reasonable drive, making the road trip is your best option. Alpena County (APN) and Traverse City (TVC) are the closest commercial airports, but they are both small with limited flights (likely meaning increased rates as well). For those flying in, the better (and more affordable option) will be flying into Detroit Metropolitan (DTW) and renting a car.

In Mackinac City, you’ll need to take a ferry out to the island. Daily and overnight parking at the dock is free, but there are fenced and covered lots available for a fee. The cost of the ferry is about $25 round trip per person, and it’s only a 15-20-minute ride to the island.

There are 2 different ferry companies to choose from:

We took the Shepler’s line, but there is not much of a difference between ferries so it doesn’t really matter which one you take. Just make sure you get on the right ferry on the way back if you buy a round trip ticket!

We stayed at the Lake View Hotel, which was just okay. If you find a great rate and cost is your priority, go for it, but if you are more flexible I’d recommend either Mission Point Resort or Island House Hotel (Mackinac’s oldest operating hotel). Both are right along the coast of the island, but Mission Point is an extra 10-minute walk away from central Main Street. Mission Point Resort was previously a college that remained open for only four years and was purchased to try and establish another college before being used as a summer hotel in 1977.

These hotels are all listed on Hotels.com and Travelocity, but since their peak season is so short, make sure to book far in advance if possible as most hotels will sell out during the summer months.

Riley’s Gill: A casual lunch alongside the marina complete with some of the best french fries around.

Yankee Rebel Tavern: A history-packed lunch in a classic American restaurant named after Ambrose R. Davenport, who was assigned to the island by the US Army and remained there after leaving the military. He became a prisoner of war during the War of 1812 after refusing allegiance to the British crown. His wife, who remained on the island, was harassed for this refusal and she became known as “the wife of the Yankee Rebel”.

Chianti: A classy house-made Italian dinner cooked to perfection, topped off with exceptional service. By far my favorite meal on the island — you can’t go wrong with just about anything you order.

Bistro on the Greens: Lunch or dinner (or just appetizers) along the Greens of Mackinac, with views of Round Island Lighthouse and Lake Huron as the backdrop. I highly recommend the Watermelon salad.

Being an island, you won’t find a ton of activities to choose from, but that’s the point. Definitely take part in the following things to do on Mackinac Island, but also find time to relax, browse the shops around Main Street, and soak in the interesting history of the island.

This is a classic activity when visiting Mackinac Island, and I highly recommend it as one of the first things you do when you arrive. It’s a great way to get your bearings on the island as you’re carted around by horses with a cheerful narration from your tour guide. Mackinac Island Carriage Tours is the oldest Horse and Buggy Service in the world. They’ve been providing carriage tours of the island all the way back since 1869!

I recommend walking over to book your tickets earlier in the day, as they don’t take reservations and the tours don’t leave at set times. The tour lasts about 2 hours. Your first stop will be the Surrey Hills Museum, where you can admire antique carriages, peruse the gift shop, or grab a snack (I highly recommend the fresh donuts).

You’ll continue your journey through the natural forests and back roads while learning historical facts and interesting tidbits about the island and its landscapes. One of my favorite stops was at Arch Rock, a 146-foot tall natural limestone formation that is 4,000 years old and one of the most photographed places on the island.

You can also opt for the combination ticket which includes access to the Wings of Mackinac Butterfly Conservatory.

While you are on the horse drawn carriage tour, one of the last stops is at Fort Mackinac, so you’ll have the option to get off here if you’d like to explore the fort more (requires a separate admission fee). Otherwise, you can always return from the front entrance as well.

Fort Mackinac was founded during the American Revolution and served as a British and American military outpost from 1780 to 1895. It is now a museum that is a part of Mackinac Island State Park. You can find the best views of Marquette Park from the fort, which was known to the soldiers as their garden.

Inside Fort Mackinac you will find 14 original buildings all open to the public, one of which, the Officers’ Stone Quarters, is the oldest in the state of Michigan (constructed in 1780). The fort also houses the Post Hospital, which was built in 1828 and is the oldest standing hospital in Michigan. Other buildings include the Post Schoolhouse where soldiers and their children could learn writing, reading, arithmetic, history, and more, the Post Guardhouse which served as headquarters for soldiers on guard duty and a jail for prisoners, and the Wood Quarters that served a number of functions over the years until it became a bar and lunch room for the soldiers in 1889.

Rifle and canon firing demonstrations by costumed interpreters are conducted throughout the day, and there are interactive exhibits throughout the fort to keep kids (and adults) engaged.

Rifle firing demonstration with the soldier’s barracks in the background

Your ticket to Fort Mackinac includes admission to a number of other historical landmarks in town. This store gives you an idea of some of the general merchandise that was sold back in the 1800s, and I recommend making the quick stop to walk through the building. It was in this American Fur Company Store on June 6, 1822 that Alexis St. Martin, a French Canadian voyager, was shot in the stomach accidentally from just three feet away. Dr. William Beaumont was the local surgeon who took care of St. Martin, though his wound never properly healed. Instead, it left a permanent opening in his stomach, and Dr. Beaumont took advantage of the opportunity to learn about the human stomach and digestive process through this hole.

Bike Around the Island

This is a must for anyone visiting Mackinac Island. Even if it has been years since you’ve been on a bike, anyone who is capable of riding a bike can comfortably complete this 8-mile loop around the perimeter of the island. I promise it’s enjoyable and not as intimidating as it sounds.

This loop takes you around M-185 (Lake Shore Boulevard), the only highway in America where no cars are allowed. It is recommended to head east from the Visitor’s Center as the mile markers proceed in that direction. There are stops along the way designated with historical markers or other informational signs, like British Landing, where the British landed in 1812 and demanded the surrender of Fort Mackinac. There are also plenty of beautiful views along the route, so take time to stop and enjoy some of them!

The path is clearly marked, so don’t worry about getting lost!

Bike rentals can range from between $8 to $13 an hour. Allow for at least 1+ hours, depending on how often you choose to stop along the way. We used Mackinac Island Bike Shop and Mackinac Cycle also has good reviews on TripAdvisor, but there are many bike rental companies to choose from.

Because there are so many bike rental options, there’s no need to plan ahead for this one. Keep an eye on the forecast and pick the day with the best weather for your bicycle journey!

There are so many fudge shops around the island I don’t even need to make a recommendation. They are all amazing. Take your pick of one (or more) of the fudge shops you’ll see just about every time you turn your head.

Skip It: Dinner at Goodfellows

Despite its appealing description, dinner at Goodfellows was underwhelming. The food and service was so-so, and it seemed overpriced for the quality. However, I would recommend grabbing a drink at the Goodfellows sports bar down the street from here on the corner.

Goodfellows, inside the Lake View Hotel

Skip It: The Grand Hotel

This one may be a bit more controversial. The Grand Hotel is well-known as being the thing to do on Mackinac Island. There are three main reasons I would not include it on your Mackinac Island trip.

But hey, if you have to go see what the hype is all about, I completely get that. Just be prepared to pay… even if you only want to walk around and check it out. They charge a $10 per person entrance fee for non-guests to enter the hotel, which adds up if you’re with a larger group. If you do go, I suggest having a drink (I recommend the strawberry daiquiri) at the Cupola Bar, which was the one part I really enjoyed about The Grand Hotel. Surprisingly, for a large drink the price only rang in at around $9, so it wasn’t as expensive as you might expect.

Cupola Bar at the Grand Hotel

Especially for those living in the midwest who can make the drive up to Mackinaw City, this trip will certainly be a memorable one. Use this Mackinac Island travel guide (downloadable version here) and book your summer weekend escape to go back to a simpler time on a peaceful Michigan island.

What else would you add to this Mackinac Island travel guide? Share your suggestions in the comments below!

Please note that some of the links on this page are affiliate links, and at no additional cost to you, I earn a small commission that will help support this site if you make a purchase. All opinions are my own. If you have any questions about the companies or products mentioned on this page, please reach out to me and I will happily answer them.