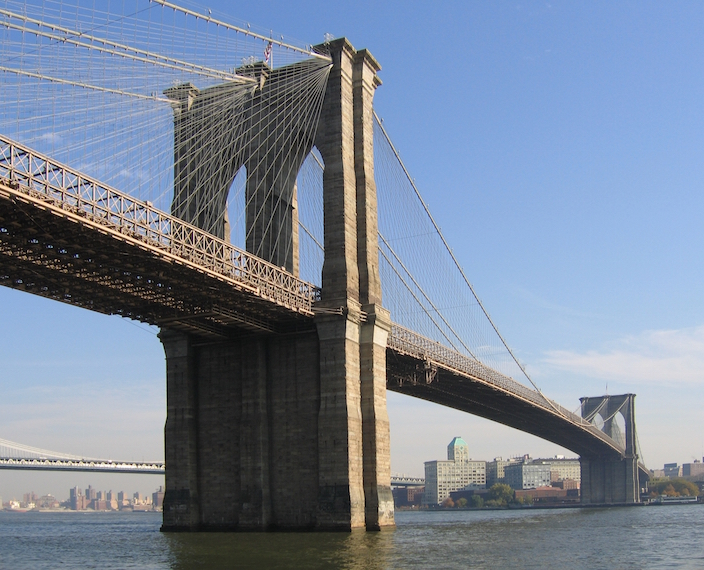 New York City is known for supplying tourists with endless attractions and events, but sometimes it’s easy to forget just how much history is on display throughout the city. From famous landmarks to historical sites that blend into the urban environment, New York has a lot to offer for any traveler with a healthy curiosity of our nation’s past. If you fall into that crowd, here are 10 New York attractions you need to put on your list.

The Empire State Building is one of the most recognizable tourist destinations and city symbols in the world, so you hardly need me to direct you toward it! But it’s still worth noting that the building is steeped in history. From 1930-1972, it held the title of world’s tallest building, but as illustrated by a timeline at ESBNYC.com, its fascinating history dates back long before then. A few notes: the land on which the building now stands was first sold for $2,600 back in 1799; President Hoover opened the building and turned on its lights via a button in Washington, D.C. in 1931; and in 1980, the building got its own zip code.

Another beacon of tourism, the Statue of Liberty is one of the defining symbols not only of New York but the entire United States. Yet it, too, is a fascinating piece of history. It was erected in 1886 as the result of a joint effort between U.S. and French artists, a group that included the same man who designed the Eiffel Tower. But unlike some other historical sites, the Statue of Liberty isn’t merely something to glance at, but an event to visit. As mentioned at a BritishAirways.com page on trips to New York, visitors can take in the statue by way of a leisurely one-hour cruise, complete with complementary champagne. Not a bad way to see one of America’s most significant landmarks!

There are dozens of famous theaters throughout New York City, but many point to the Apollo as the one that stands tallest from an historical perspective. Located in Harlem and active to this day in hosting major musical and comedy acts, the theater is perhaps best known for having contributed to the launch of James Brown’s career back in the early-’60s.

Located in Flushing, Queens, Corona Park was transformed from a virtual wasteland into an attractive and well-kept park area in advance of the 1939 World’s Fair. Its prevailing landmark is a towering, see-through metallic globe, and it has become one of the more beautiful and unchanged historical attractions in all of New York.

This beautiful, sprawling cemetery in the Bronx was established in the mid-1800s. While a cemetery isn’t typically a tourist attraction, this one is worth visiting for the incredible historical figures who have been laid to rest there. According to a CBS.com list of historic New York destinations, the likes of Herman Melville, Duke Ellington, and Joseph Pulitzer are all among these figures.

If you’re one to be impressed by feats of engineering, the Brooklyn Bridge remains a wonder today, despite having been constructed near the tail end of the 19th-century. When it was built, it was the biggest suspension bridge in the world, and it remains one of the more visually impactful ones. And here’s a bit of a bonus: you can get a great look at it on the same cruise that takes you by the Statue of Liberty!

Today, Governors Island is a curious place: an island park just a short distance from downtown Manhattan, generally lending itself to walking and cycling paths and outdoor art galleries. But NPS.gov reveals a pretty interesting history behind the island. It actually began as a colonial army militia outpost in 1755, though it was held by the British (along with the rest of New York) for most of the Revolutionary War. The island remained dedicated to military service for much of history thereafter.

This one isn’t actually as old as it looks—it was built in the ’70s—but the cathedral was the first of its kind in the U.S. As for what exactly its kind is, well, it’s basically the sort of towering Roman gothic monument you only imagine stumbling upon in Europe’s centuries-old cities.

Built in 1748, the Van Cortlandt House is the oldest domestic establishment in the Bronx and through restoration stands as an impressive colonial era manor. It still serves the city as a museum today, but its past is much more interesting. Specifically, the building intermittently housed famous Revolutionary generals Lafayette and Washington during the war!

Somewhat like St. Patrick’s Cathedral, The Cloisters museum isn’t actually as old as the time period it evokes. The museum was built in the 1930s as an add-on of sorts to the Metropolitan Museum of Art, and its collection is primarily medieval in nature. But the real attraction of The Cloisters is its gorgeous design and construction, which was done in the image of old world Spanish and French abbeys.